Do you ever feel overwhelmed by all the different types of soil? Don’t worry; you’re not alone!

There’s no such thing as a stupid question, and this article will clarify the qualities of topsoil and potting soil for you.

What’s the difference between topsoil and potting soil? Potting soil is used in pots and containers and can be used indoors or outdoors. It is amended with nutrients and designed to drain well. Topsoil is used in much higher quantities. It is used in large landscaping projects, and it hasn’t been enriched or amended like potting soil.

This article will help you understand both topsoil and potting soil.

You’ll learn how to make and refresh potting soil so you can save a bunch of money, and I’ll give you some tips for improving topsoil without any expensive inputs. Let’s get started! 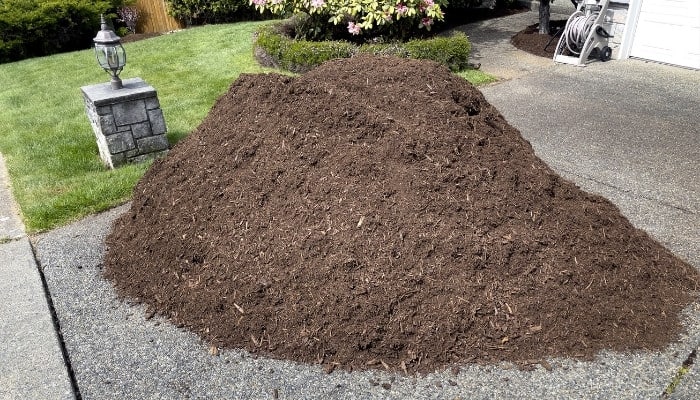 Before we continue, you need to know that topsoil is not the same as garden soil.  (Read more about the differences between topsoil and garden soil.)

What Exactly Is Topsoil?

According to the Merriam-Webster dictionary, topsoil is “surface soil usually including the organic layer in which plants have most of their roots and which the farmer turns over in plowing.”

So, topsoil is officially just the upper layer of the earth’s soil in which trees, grasses, and other plants grow.

But when gardeners have problems with their existing topsoil, they might consider buying some in bulk.

For example, you might order some topsoil after a landscaping project to fill in any holes or build new beds. That’s why topsoil is also known as “fill dirt.”

Here are some examples of when you might be using topsoil:

You might still use a few handfuls of high-quality garden soil directly around the roots of seedlings as you plant them in the topsoil.

But you wouldn’t waste expensive or time-intensive resources on such large surface areas.

It would be like using dollar bills to start a fire. It would work just fine, but why would you do that?!

How To Improve Topsoil

Sometimes it is appropriate to buy topsoil.

For example, if you’ve just built a new house and heavy machinery has removed all the soil around the building, then you might want to buy a truckload to speed up the recovery process.

But if your existing topsoil is just not working well for your plants, then you can improve it.

First, you’d need to work out what type of soil you have. Loam soil is highly desired by gardeners, but it’s also possible to improve sandy soil or clay soil with the right management.

If your soil texture seems fine, there are a couple of other things that might be the problem. Usually these would be:

It would take a whole book to explain how to address these problems fully, but these top tips should help get you started on the road to topsoil recovery:

Is Topsoil the Same as Potting Soil?

Topsoil is not the same as potting soil. Topsoil is the top layer of the earth, or it can refer to the soil you import to take this place in your yard.

You’d use potting soil in smaller beds or pots for container gardens. You can also use it inside the house for garden plants. 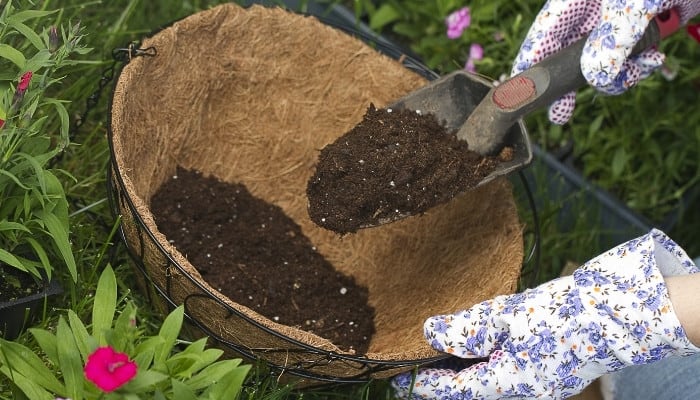 I spent practically my whole life thinking that potting soil was just what you germinate seeds in before planting the seedlings out in the yard.

(And I have a career in soil regeneration, so don’t feel bad if you thought the same!)

Hopefully, this section will clear up any confusion!

What Exactly Is Potting Soil?

It has to include organic matter, drainage materials, and nutrients so that your plants can grow well in their limited environment.

People usually use the word potting soil when they mean potting mix, but they are slightly different (more on that later).

You can use potting soil for plants that you grow inside or outside.

However, the higher-end version called potting mix is better for container gardening because it drains better. It’s also lighter, so it’s less likely to compact.

With both potting soil and potting mix, the idea is to provide your plants with everything they need so they thrive just as well in a pot as they would in the ground.

Why Use Potting Soil?

As a soil regeneration educator, my number one priority is to get as much microscopic life as possible into my garden soil.

That means bacteria, fungi, and all kinds of tiny predators are encouraged to join the party.

They form a balanced food web, protecting your plants from pests and disease and making your soil more resilient to climate extremes.

But when you’re growing in a pot, you have to focus more on getting the nutrition and drainage right rather than letting the microorganisms do it for you.

This is because your plant will not be part of the bacterial and fungal networks beneath the ground. Good potting soil helps make up for what the container environment lacks.

You can make potting soil from a whole mix of different ingredients. But generally speaking, you need three things:

You can also add some horticultural charcoal at the bottom of your pots if you want to make sure you don’t get any bad smells coming out of your house plants.

You can use potting soil or potting mix for growing plants in pots. Potting mix is more expensive, but it’s also better for growing in pots because it drains more effectively.

Succulents would need more drainage than you get with a general potting soil, so a good-quality potting mix will be even more important.

I love this video by Planterina, which offers the best explanation of how to make a good potting mix that I have ever found.

Amanda suggests a mixture of 60% coconut coir and 40% drainage and nutrients made up of pumice and worm castings.

(You could use peat moss instead of coconut coir, but here is why I don’t).

How To Improve Potting Soil

I wouldn’t bother with too many additional nutrients, but I would use the liquid from my worm bin as a rich nutrient tea.

If you aren’t worm composting already, I highly recommend that you give it a go.

It is a brilliant way to compost without attracting pests or making bad smells, and the worm tea and castings are fantastic enhancements for all types of soil. People even do it in their apartments!

What’s the Difference Between Potting Soil and Potting Mix?

Potting soil and potting mix are two words that people frequently get mixed up.

Potting soil is denser and heavier. It isn’t sterile, so it could have some pests present. Due to its texture, potting soil is more likely to get compacted than potting mix.

Potting soil would be great for large outdoor pots that you’re growing vegetables in. But for house plants, I’d recommend going for a lighter potting mix.

How To Decide Which Soil To Use

If the plants you are growing are native to dry environments, you want a potting mix rather than potting soil, but for most plants, you’ll be okay with potting soil so long as you don’t overwater it.

Topsoil would be for covering large areas; you definitely don’t want potting mix for that!

Can Topsoil and Potting Soil Be Mixed? 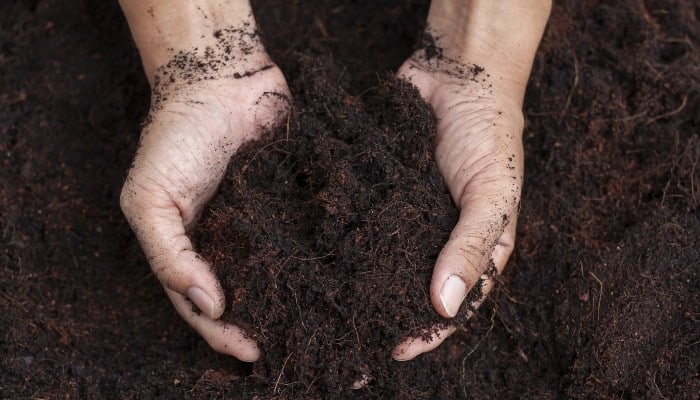 Yes, you can mix topsoil and potting soil if you’re on a budget, particularly in the really large containers.

Make sure you sprinkle some excellent potting soil and nutrients around the base of your plant.

I would go for worm castings, but you could also use a blood meal or bone meal. Be sparing on the amendments because over-fertilizing is absolutely a thing!

When it comes to topsoil, you’re probably going to be needing a lot.

So rather than ordering online and spending tons on shipping fees, I recommend that you find a topsoil specialist in your area.

You can Google something like “topsoil companies in Wyoming.”

This way, you’ll also be getting more local topsoil, so it contains native microorganisms that aren’t all going to die as soon as they arrive.

If you only need a small amount of topsoil, you might want to pop down to your local garden center and have a chat with them about what they have on offer.

If you’re growing tons of vegetables in containers, then you can always mix your potting soil with well-finished compost or topsoil.

Just make sure that at least 30% of the mixture is fresh potting soil for the best results.

If I were buying online, I would personally go for the organic potting soil from Wondersoil because it contains worm castings and Mycorrhizae, which will help support healthy microbial life even in a container setting.

It also has perlite to help with drainage, and it doesn’t contain peat. Instead, it contains coco coir, which is a sustainable and equally good alternative.

I also like that this option is organic because I made a considerable effort to reduce chemical inputs in my garden.

It would seem a waste of time to do all that if I don’t know that my soil is safe.

Don’t worry if the bag seems small, it will expand by up to four times when you add water. This will save space in your shed and also reduce shipping costs and emissions.

Indoor plants are generally smaller than edible container gardens, so I would make sure I had a top-quality potting mix if at all possible.

To save money and ensure that I could trust the ingredients, I would make my own. (So many people have problems with gnats when they buy soil online!).

It’s not hard to make potting mix for yourself, and you’ll save a ton of money.

You’ll also be sure you haven’t got any pests or pathogens in your soil, so you aren’t going to wake up to a cloud of gnats in your kitchen.

You just need to buy some coconut coir, pumice, and worm castings.

(You can also make your own worm castings and recycle food waste with a worm bin. I’m telling you, these guys are my best friends!)

You’ll find more detailed instructions about making the mix in the Plantelina video I shared earlier in the article.

I prefer organic potting soil because gardening without chemical inputs is a personal goal.

It means that I know the food that ends up on my table won’t contain substances that could affect my health. For inedible plants, non-organic potting soil would be less of an issue.

Can You Use Potting Soil in the Garden?

Potting soil isn’t going to kill your garden plants, but it would be a waste of money.

You don’t need to prioritize dense nutrition or drainage so much in a garden environment, where the natural environment will support your plants to thrive.

Can Potting Soil Be Reused?

You can reuse potting soil, but I would sieve out any large roots first. You can then freshen it up with about 30% new potting soil.

To do this, tip your old potting soil into a larger bucket and mix it with the fresh soil. You can now use it for future pots.

The main differences between topsoil and potting soil are the price, the nutritional content, and the drainage.

Potting soil will help your potted plants to thrive, but it would be a total waste to spread it in large areas over your yard.

If you’re having problems with your topsoil, you’d be better off looking at your management practices than spending your retirement fund on a truck of potting soil.

Of course, topsoil can be very useful at the right time and place.

I hope you found this article helpful, and I wish you all the best with your gardening endeavors!